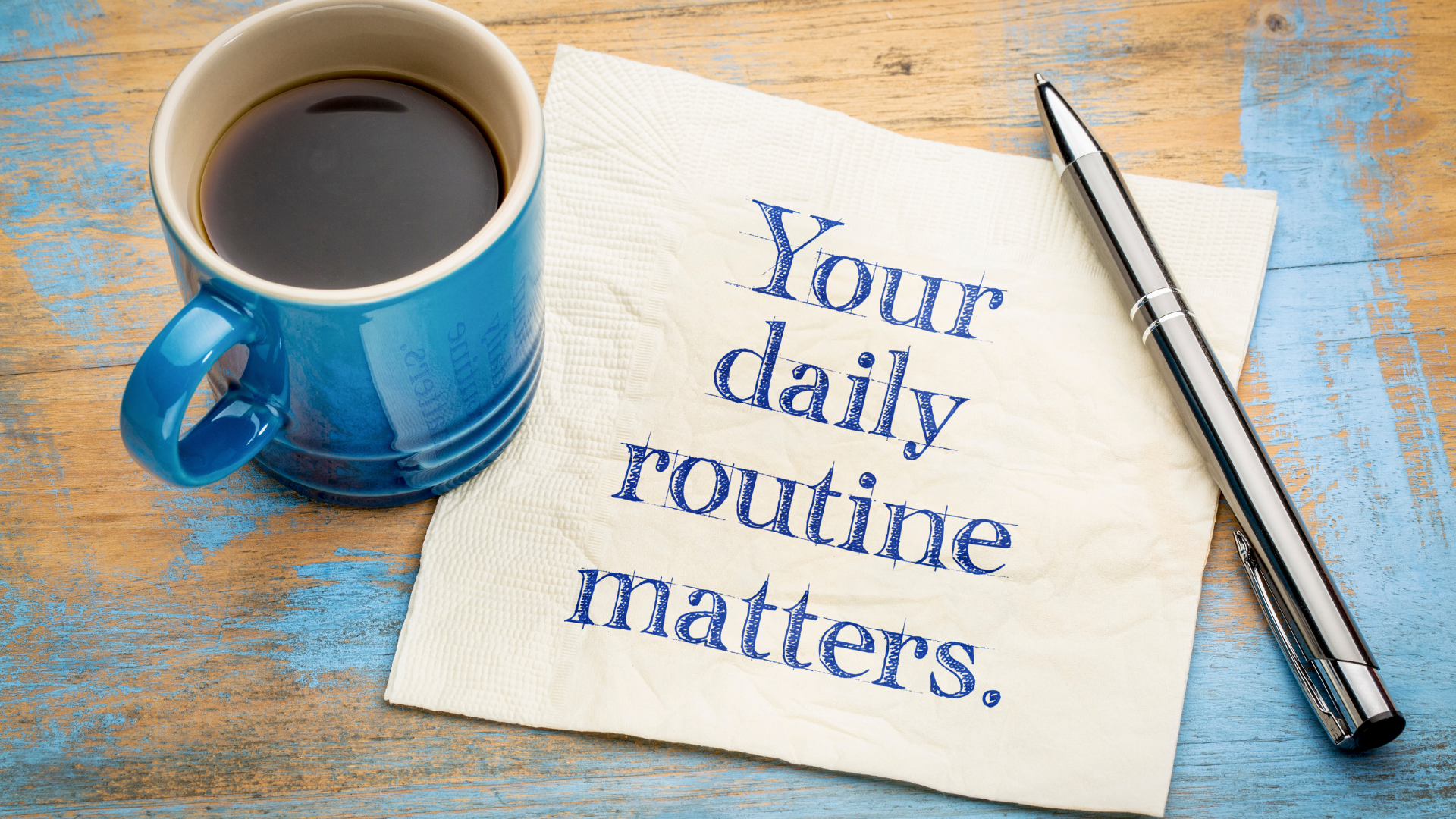 Balancing work and life can be challenging for the person working in most occupations.  However, achieving balance for first responders is more challenging yet achievable.  Let’s begin by understanding what work-life balance (WLB) is and what it isn’t.  WLB is about aligning your daily behaviors with your priorities in life.  The challenging piece of this definition to many first responders that I have had the privilege of knowing through my workshops is putting your finger on exactly what your priorities are in life.

In my workshops, I frequently hear from first responders that say family, health, and work are their most important priorities.1 However, when one assesses their daily behaviors, a shortfall with family and health is often noticeable.  The loss of quality time with family may occur for some from working overtime, a second or third job, and coping with mental stress in unproductive ways.  Mental stress can negatively impact the family through depression, anxiety, alcohol, or drug abuse, possibly leading to divorce.  The average firefighter continuously adds 3-pounds per year which detracts from the firefighter’s physical health on and off the fire ground.

Many undesirable effects from eating the wrong foods, overeating, and a lack of exercise are widespread within the fire service.  A recent study noted an overwhelming 80% of firefighters are overweight and obese.2-4 This statistic yields real issues for the health and wellness of firefighters, their families, and their department.  According to Chief Todd LeDuc (Ret), Editor of Surviving the Fire Service, firefighters experience a significantly increased risk with cardiovascular disease, certain types of cancers, and mental illnesses versus non-firefighters.5 Although firefighters often “state” their priorities are family, good health, and work, they are beginning to recognize their daily behaviors are not in alignment and therefore do not support their priorities in life.1

The first step in habit stacking is to understand what habits are and how they function.  Habits are an efficient way the brain works to engage in more than one activity.  Your brain doesn’t need to think about or deliberate on the next steps in a sequence of actions.  For example, what are your routines and processes when you first awake in the morning?  Perhaps it is going to the restroom, washing your hands, brushing your teeth, grabbing a cup of coffee.  Your morning habit is probably something like that, and the question to ask yourself is, how much did you think about that sequence when performing those habits?  Probably not much because that is the role of habits.

According to James Clear, habits are why you are in shape or out of shape and whether you are generally happy or unhappy.6  Basically, the way we live our lives results from our habits.  If you are interested in changing something about your life, creating or restoring some healthy habits is imperative.  Creating new healthy habits is considered by many to be very tricky, time-consuming, and outright difficult to achieve.  However, together let’s try to break the habit of believing they are so challenging to create by simply pausing that belief and giving habit stacking some serious thought and effort.

Habit stacking is a methodology of placing the creation of a new habit simply by stacking the sought-after action in the most advantageous spot in a line-up of your current habits.  The key to this is to first think about the new activity you want to do and then spend some time thinking about your current habits and where the most advantageous spot would be to place this newly desired action.  For example, suppose you wanted to implement some new habits or routines into your life to help you achieve greater physical health, mental well-being, and positive family relationships.  This sounds like a massive project at first; however, it is not too difficult when you choose the habit stacking method of creating new routine behaviors.

The first step is to think about the new actions you want to do to help you achieve greater physical health, mental well-being, and positive family relationships.  Let’s suppose you want to increase your cardiovascular health, find a helpful method to decompress your recent shift experience for your mental well-being and discover a way to reconnect with your family after your shift in a positive manner.  The habit stacking method below is a real example of how firefighters I have worked with have created their new habits in a very successful way and has been sustainable.  I will use the picture below to share the process they went through to stack their new habits. 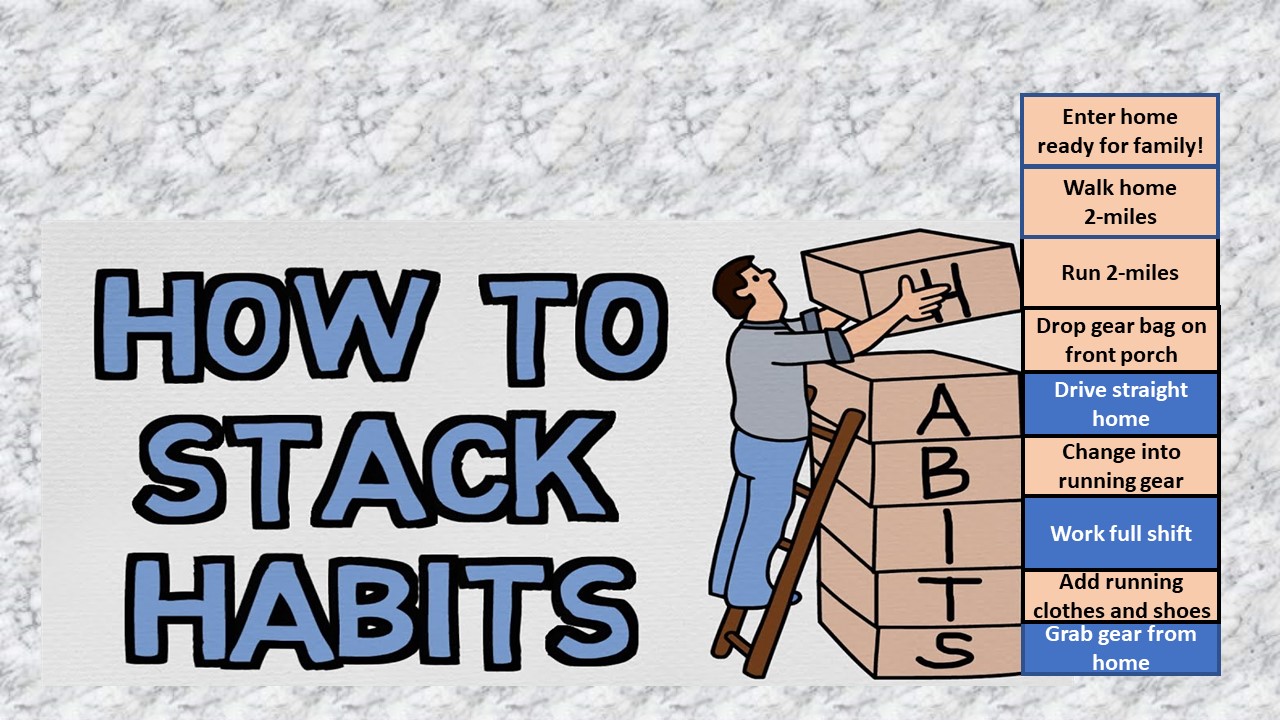 Once the first step was completed, that is, to increase cardiovascular health, mental well-being, and positive family relationships, we went to work on thinking about current habits.  For this lesson, we will use the name Robby as our firefighter example.  Robby thought he wanted to create the habit of running a couple of times per week to improve his physical health.  He took some time to examine his current routines and habits.  He realized that he drove straight home every time he finished his shift.  He did not stop at the store, gas station, or any other place.  He always went straight home.  He chose to stack the habit of running when he returned home from this shift.  However, he didn’t stop with just that idea.  He thought further about what he could do to help him work through the experiences of his recent shift so he could enter his home and greet his family more positively.

As you can see in the picture, Robby quickly figured out how to best stack his new habits onto his current habits.  It is important to note that before he began implementing his new habits, he sat down with his wife and children.  He had a productive conversation with them about his health improvement plans.  Robby shared how he believed everyone in the family would benefit, and he received their buy-in.  They supported Robby taking an hour after his shift to work on his new healthy habits.

He starts with a current habit of organizing his gear for his upcoming shift work.  He slides a new practice of adding his running clothes and shoes to his gear bag.  He goes to work and works his shift.  He slides in a new habit of changing into his running clothes and shoes after his shift has ended.  He drives straight home, a current habit, and parks his truck in the driveway.  He drops his running gear bag outside on the front porch by the front door.  He then runs 2-miles away from his home to help support his cardiovascular health.  Robby purposely runs 2-miles away from his house instead of quarter-mile circles around his neighborhood because he wants to stack his new mental health habit on top of his running habit.  Robby chose to walk the 2-miles home slowly.  He spends this time processing his thoughts about his most recent shift.  By the time he arrives home, he is ready to greet his family and be the best spouse and parent he can be to foster greater positive relationships with his loved ones.

Robby’s example describes the process of habit stacking.  It is important to remember to begin with what you would like to achieve with a new habit and then think and evaluate your current habits.  You have hundreds of habits that you process each day, and most of them you are not aware of because they are operating from your unconscious mind.  Try to examine your routines and habitual behaviors to find an appropriate spot to stack a new habit or two.  I encourage you to take your time with this process and give it much thought.  Once you select the place, go ahead and implement the new habit.  I believe you might be pleasantly surprised at how helpful it is to stack a newly desired habit on top of a string of current habits.  I encourage you to look for some signs of success.  Engaging in the habit 100% of your desired time might sound like the path to success; however, let’s not put the bar so high.  When people look for perfection, they often fall prey to the “all or nothing” culture.  Please give yourself some grace, kindness, and love during this process of habit stacking.  Engaging in a new healthy behavior or two, some or most of the time, is a win in and of itself.

Say “No” to the All or Nothing Culture

What I’m talking about here is the ability to create sustainable habit change.  Sustainability is achieved through practice, repetition, and receiving a desired outcome of the new behavior.  One of the keys to creating sustainable change is to not subscribe to the “all or nothing” culture of implementing new habits.  The paid gym membership and diet industries exemplify the concept of “all or nothing.”

Exercise gyms operate a business model whereby 90% of their paying customers do not visit the gym after the first 30-days of signing up.  However, they do not cancel their membership because they believe they might start back one day.  The diet industry is very similar.  How many people do you know have tried to begin a new exercise routine or diet?  Many participate for a few weeks and see a downward trend in their progress.  They get into the third or fourth week of a downward direction to discover how unhappy they are with their progress and then decide to throw in the towel.  They quit.  It’s either they will meet their weekly goals every week, or they quit.

I had a firefighter at one of my workshops tell me that quitting is the natural progression of a downward spiral.  I asked him to explain.  He shared with me that he made a goal the previous year to exercise three times per week for 45-minutes.  He said, “the first week I exercised three times, the second week it fell to twice, and the third week just once.”  I said, “Then what happened?”  He said, “I quit.  Dr. Donnie, don’t you see the trend line, three times, twice, then just once?”  I said, “I do see the trend.”  He said, “well, that’s the natural progression that leads one to quit.”  I said, “I understand how you are looking at the trend line.  However, perhaps you need to reframe how you look at the data.  You exercised three times the first week, twice the second week, and once the third week.  That’s six exercise sessions in three weeks.  What did you do the previous three weeks?”  He was speechless.  He realized that he went from zero exercise sessions to six times in three weeks.  Wow, that trend line is looking good.  Please give yourself some kindness and love when you are building new habits.  Reframe situations to provide yourself with a positive trend line.